Components Of Arch | Parts Of Arch

Components Of Arch | Parts Of Arch

Arch is a mechanical arrangement of wedge-shaped blocks of stones or bricks mutually supporting each other and supported at the end by piers or abutments. In common with lintels, the function of an arch is to carry the weight of the structure above the opening. 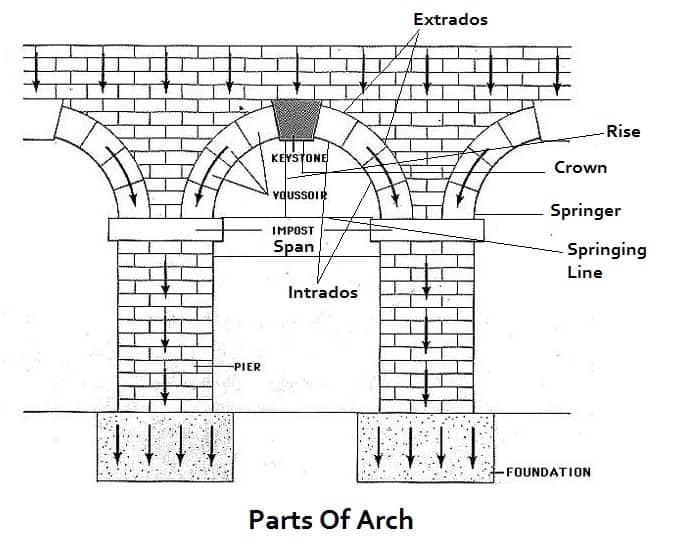 The different parts of an arch are described below:

It is the part of wall or pier on which the arch rests.

It is a course of stones or bricks having a curve similar to that of the arch.

It is the under-surface of an arch.

It is the outer surface of an arch or the outer curve of the arch ring.

The wedge-shaped units forming the arch are known as voussoirs or arch stones or arch block.

Springing stone or springer is the first voussoirs at springing level on either side of the arch.

It is the highest central wedge-shaped block of an arch.

It is the surface of the abutment on which the arch rests.

Span is the clear horizontal distance between supports.

Rise is the vertical distance between the springing line and the highest point on the intrados.

Springing points are the points at extremities of the intrados.

The depth of the arch is the perpendicular distance between the intrados and the extrados.

Haunch of the arch is the portion of the arch situated centrally between the key and skew backs.

Points To Be Observed In Supervising Brick Masonry.