Components Or Parts Of Stairs:

There are different parts of stairs having their own function. In this article, we have discussed each part of a staircase and its details. 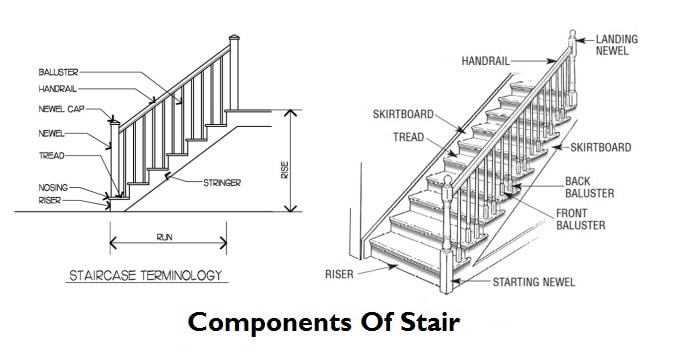 The different parts of stairs are as follows:

It is a combination of tread and riser which permits ascent and descent from one floor to another.

The upper horizontal portion of the step over which foot is placed during ascending or descending a stairway is known as tread.

The vertical member of the step is known as riser. It is used to support and connect the successive treads.

The vertical height between two consecutive treads is known as rise.

It is the projecting part of the tread beyond the face of the riser. Nosing is usually rounded to give good aesthetic effect to the treads and make staircase convenient and easy to use.

The horizontal distance between without the faces of two consecutive risers is known as going of steps.

A continuous series of steps without any break between landings or landing and flooring is known as flight.

The vertical height between the tread of one flight and the ceiling of the overhead construction is known as head room. Head room should be sufficient so as not to cause any difficulty to the persons using the stair. Head room is also known as head way.

It is an inclined rail provided at convenient height over balustrades. The inclination of the rail is parallel to the slope of the stair. It serves as a guard rail and provides assistance to the users of the stair. hand rails can be molded in so many architectural forms. It also acts as a protective bar.

It is an individual vertical member made of timber, metal, or masonry and fixed between string and hand rail to provide support to the hand rail.

Framework made from series of balusters and hand rail is known as balustrade. It is also known as barrister.

The vertical angle made by nosing line of the stair with the horizontal is known as pitch or slope of the stair.

The total length of the stair in horizontal plane including lengths of landings is known as run of the stair.

The undersurface of the stair is known as soffit. It is either finished with plaster or covered with a ceiling.

It is a sort of additional moulding provided under the nosing or tread to beautify the step of elevation.

It is a vertical timber or steel post provided at the head, foot, or at point where the balustrade changes its direction. It is also used for supporting the hand rail.

The thickness of the RCC slab over which steps of RCC rest, is known as waist.

It is an imaginary sloping line parallel to the slope of the stair and touching the nosing of all the treads.

It is the approximate line on the stair, adopted by the people during the use of the stair. This line is located about 40 cm from the centre of the hand rail.

It is triangular framing under the outside string of an open string stair.

Do you know any other parts of stairs let us know in the comments.