English bond is considered as the strongest and most widely used brick bond in construction work. It consists of an alternate course of headers and stretchers. 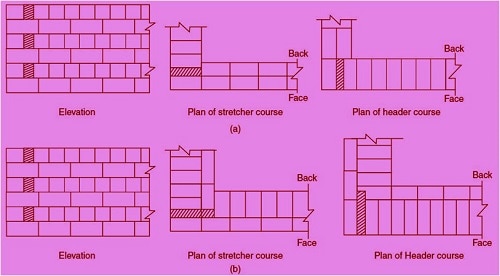 The features of these types of brick bonds are as following:

1. In this brick bond, every alternate course demonstrates headers and stretchers.

2. A course will show either just headers or just stretchers when seen along the side.

3. To break the vertical joints in progressive courses, it is important to provide a queen closer after the first header in every header course.

4. Queen closer is required just in header course. Stretcher course does not need any closer.

6. Bricks in the similar course don’t break joints with each other.

7. When the thickness of the wall is even multiple of half brick, a specific course will demonstrate only headers or stretchers on both the confronted of the wall.

9. The quantity of joints in the header course is about twice that in stretcher course. So, header joints ought to be kept as thin as possible to maintain appropriate lapping over joints. (immediately below the course)

In these types of brick bond, each course consists of alternate headers and stretchers. Every header is centrally supported over the stretchers below it.

To break the vertical joints in the successive courses queen closers are placed in alternate courses next to the queen header.

Bats are essentially required for the walls having their thickness equal to odd numbers of half bricks. Flemish bond gives a better appearance than English bond. 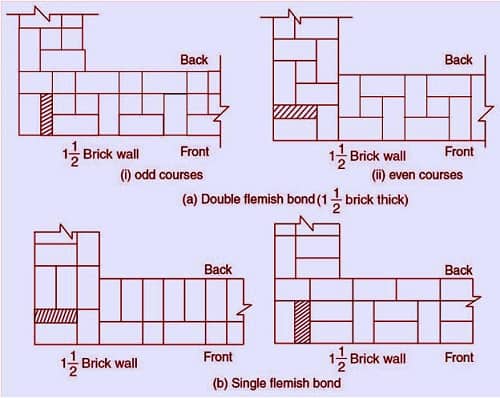 The primary elements of Flemish bond are as following: 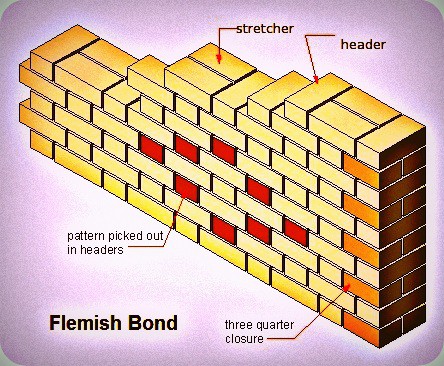 1. Each course comprises of headers and stretchers.

2. To break the vertical joints in progressive courses it is necessary to provide queen closers in interchanging courses besides the quoin header.

3. Each header is centrally upheld over a stretcher beneath it.

4. Flemish bond gives a preferable appearance over the english bond.

5. Bats are essentially required for the walls having their thickness equivalent to odd number half bricks.

Flemish bond can be sub-divided into two different categories.

This bond enables one brick wall to have flush and uniform faces on both sides. It gives a better appearance but comparatively weaker than english bond.

The difference between English bond and Flemish bond are as follows:

English bond is much stronger than flemish bond for the walls thicker more than 1½ brick.

Flemish bond is economical as it uses broken brickbats, although it requires some extra mortar for additional joints. 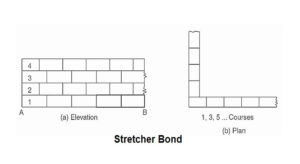 Stretcher bond is the simplest type of brick bond used for construction works. Sometimes it is also known as running bond.

In the arrangement of stretcher bond, all the bricks are laid as stretchers (as shown in fig).

No header is present in this bond, hence suitable reinforcement should always be provided for the construction of structural bondS. 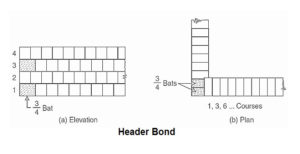 In this type of brick bond, all the bricks are placed as headers on the faces (as shown in fig). This bond is also known as the heading bond.

The overlap is half the width of the brick and can be achieved by providing a three-quarter bat in each alternate course at quoins.

Header bond can be used in the construction of a curved structure, brick foundation,s etc.

Other Types Of Brick Bonds:

2 thoughts on “Types Of Brick Bonds”