The beam that is longitudinally reinforced only in tension zone, it is known as singly reinforced beam. In Such beams, the ultimate bending moment and the tension due to bending are carried by the reinforcement, while the compression is carried by the concrete. 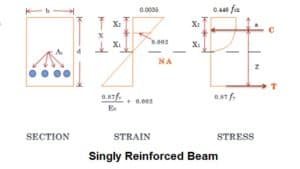 The beam that is reinforced with steel both in tension and compression zone, it is known as doubly reinforced beam. This type of beam is mainly provided when the depth of the beam is restricted. If a beam with limited depth is reinforced on the tension side only it might not have sufficient resistance to oppose the bending moment.

Besides this, doubly reinforced beams can be utilized under following conditions,

1. When the outside load is alternating, that means the load is acting on the face of the member.

2. The load is eccentric and the eccentricity of the load is changing from one side to another side of the axis.

3. The member is subjected to a shock or impact or accidental lateral thrust.