What Is Cantilever Beam?

A cantilever beam can be defined as a beam that is supported on only one end. That means one end is fixed and the other end is exposed beyond the support. The beam transfers the load to the support where it can manage the moment of force and shear stress.

The moment of force is the tendency of a force to twist or rotate an object. Shear stress is defined as stress which is applied parallel to the face of a material.

Cantilever construction allows for overhanging structures without external bracing/support pillars. Cantilever beams can also be constructed with trusses or slabs. 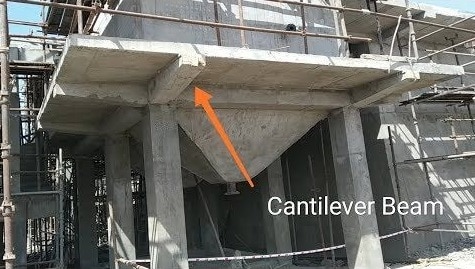 2. Only one fixed support is required, support on the opposite side is not required.

4. The span can be greater than that of a simple beam because a beam can be added to the cantilever arms.

5. Because the beam is resting simply on the arms, thermal expansion and ground movement are fairly simple to sustain.

6. Cantilever beams are very rigid, due to their depth.

3. You either need to have fixed support or have a back span and check for the uplift of the far support.

4. when the cantilever beam is loaded at one end, the moment at the fixed end is higher, if more load is applied, it can break free from the support.

Advantages And Disadvantages Of T-Beam

All Types Of RCC Beams In Construction

Types Of Slabs Used In Construction

All Types Of Bridges And Their Uses