Method And Period Of Removing Formwork

Method And Period Of Removing Formwork

Method And Period Of Removing Formwork:

The formwork should be constructed in such a manner that it is possible to remove the different components in the following order of sequence:

1. Shuttering forming vertical faces of walls, beams and columns sides (which bear no loads but are used only to retain the concrete) should be removed first.

2. Shuttering forming soffit to slabs should be removed next.

3. Shuttering forming soffit of beams, girders or other heavily loaded shuttering should be removed in the end.

Duration of time up to which the formwork should be kept in place depends upon many factors such as type of cement used, shape and position of the member (whether the member is vertical, horizontal or inclined) loads to be carried by the members and the temperature of the air. In general, rapid hardening cement, warm weather, and light loading conditions allow early removal of formwork.

Early release of formwork permits its reuse in other areas and this results in economy by way of optimum utilization of material and fast construction. At the same time, premature removal of formwork may prove to be dangerous and should not be allowed.

The formwork should, under no circumstances, be allowed to be removed until the concrete reaches a strength of at least twice the stress to which the concrete may be subjected to at the time of removal of formwork.

In normal conditions (where the air temperature is above 20°C and where ordinary Portland cement is used) the formwork may be struck or removed after the expiry of the period indicated against respective members in the below table. 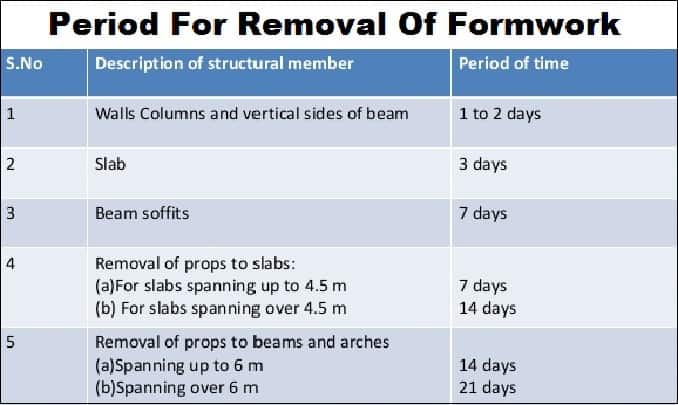 For rapid hardening cement 3/7th of the periods given in the above table will be sufficient in all cases except vertical sides of slabs, beams, and columns which should be retained for at least one day.

All formwork should be eased gradually and carefully in order to prevent the load being suddenly transferred to concrete. The forms can be easily stripped by loosening the double edges. Sometimes the swelling of timber may result in shuttering getting jammed at places. In such situation, a small crowbar can be used to strike off the shuttering. In Case of cantilever slabs and beams, the centering should be removed only after necessary construction to provide proper counterweight has been carried out and the same has attained sufficient strength.