Types Of Scaffolding Used In Construction

Types Of Scaffolding In Building Construction:

Scaffolding is a temporary rigid structure having still, bamboo, or timber platforms raised up with increasing the building height. It enables the mason to work at different stages of a building and takes up the materials for immediate use at various heights. Different types of scaffolding are used depending upon the types of construction. 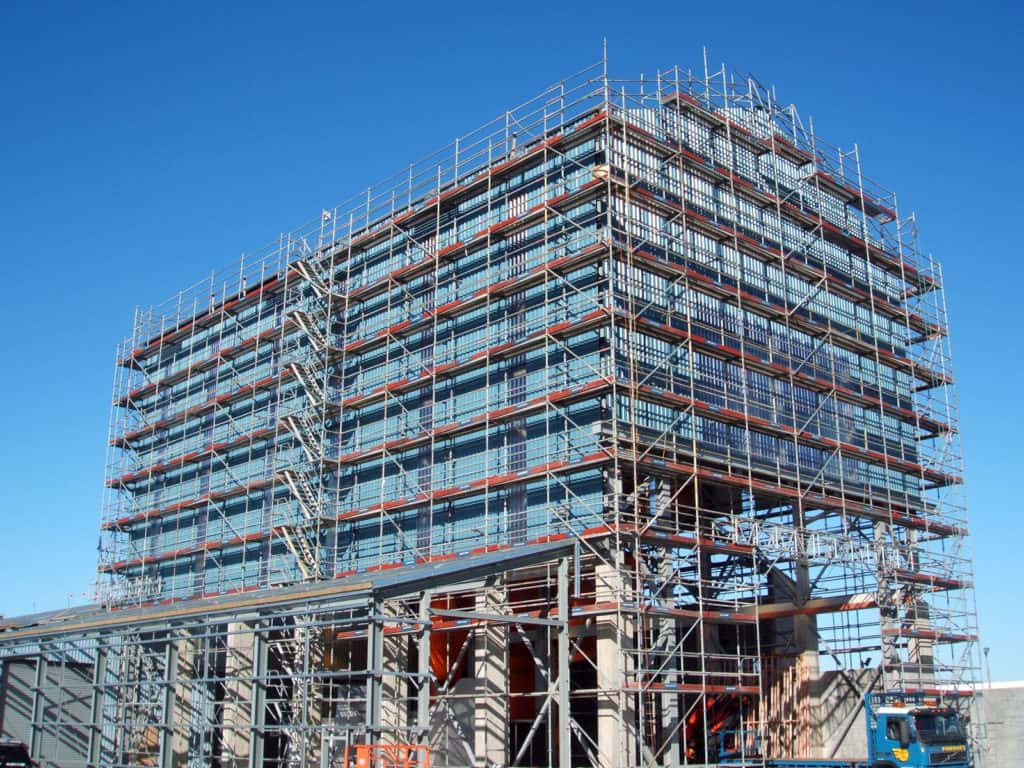 1. Standard: It is a vertical member supported on the ground.

2. Ledgers: Ledgers are the longitudinal horizontal members connected with standards.

3. Braces: Braces are the diagonal members that are connected with standards to stiffen the structure.

4. Put Logs: Put logs are the transverse horizontal members that are 90 cm in length and are generally spaced 120 cm apart. They are provided to support the working platform.

5. Transoms: When both the ends of putlogs are connected with ledgers, it is called transoms.

6. Boarding: Boarding is a horizontal member supported by putlogs. It is used to enable the mason and materials.

7. Guard Rail: It is similar to ledgers, used for better protection at the working level.

8. Toe Board: It is a long horizontal board of wood used at different working levels.

Different types of scaffolding are described below:

This type of scaffolding consists of standards firmly secured on the grounds at 2.4 to 3 m. The standards are connected to each other by ledgers at every rise of 120 to 150 cm. They are provided on the building site of the standards and are secured in position by rope-lashing.

Putlogs are lashed on the ledgers at one end and into the holes in the wall at the other end. In high scaffolding, cross braces are invariably used to stiffen the temporary structure. Braces consist of poles tied by rope-lashing on the standards.

Close mason’s scaffolding: They are supposed to carry loads of heavy blocks of stones and the stresses produced on account of the lifting device and hence they are made stronger by placing the standards at a fairly close distance apart.

The construction of steel scaffolding is similar to that of timber scaffolding. In this case, the wooden members are replaced by 38 mm to 64 mm diameter steel tubes and instead of rope-lashings, special types of steel couplets or fittings are used for connecting different members.

The steel tubes used for scaffolding for normal building construction work are heavy class and of diameter varying from 40 to 60 mm.

In this type of scaffolding, the vertical tubes called uprights or standards are spaced 2.5 to 3 m apart. Each standard is welded to a base plate, square or circular in plan. The base plate has holes so that it can be spiked to a timber or concrete base, thus forming a rigid foundation for the scaffolding.

Ledgers or the longitudinal tubes connecting the standard and are spaced at 1.8 m vertically apart. Short tubes or put logs are normally 1.2 m to 1.8 m in length. The putlogs have special ends to fit into the joints in the wall and thus no big holes are required to be left on the wall for their bearing. 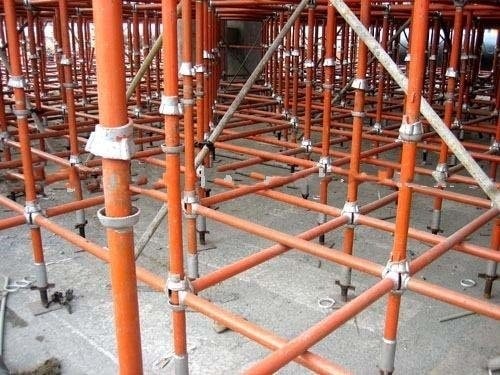 Although it works out to be costlier initially, but considering its several advantages and the increased number of reuses, it proves to be economical in the long run and hence it is being extensively used these days.

Tubular scaffolding mounted on wheels can be used for carrying out the work of painting the walls, underside roofs, etc.

When scaffolding is to provide for a building on the side of a busy street where the construction of ordinary scaffolding will obstruct the traffic on road, a needle scaffold is used.

The scaffold is erected from window corners of string courses by means of projecting needles. A needle is a timber beam that cantilevers out through the holes cut in the wall.

From inside the needles are supported on sole pieces and are prevented from lifting up by vertical struts wedged between the needles and the headpieces. The projected end of the needle is supported by an inclined strut that rests on the window sill.

The joint between the raking or inclined strut and the needle is clamped by means of dogs. The arrangement provides the staging for the erection of ordinary types of scaffolding. 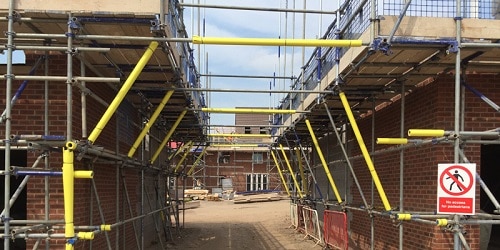 Points To Be Observed In Scaffolding

4 thoughts on “Types Of Scaffolding Used In Construction”