What Is Top Down Construction?

Top down construction is the reverse method of bottom-up construction in which the permanent structure is built from top to bottom of the basement along with deep excavations.

In this method, the basement floors are constructed as the excavation progresses. The basement concrete slabs act as lateral bracing for the perimeter wall system.

Ground level and subsequent basement slabs are poured, accessing holes left to allow excavation beneath. As each subsequent subgrade level is completed, the floors act as lateral bracing for the perimeter wall system.

A perimeter wall, which is generally referred to as a Diaphragm wall (or D wall), is a single, safe solution for all the constructional problems encountered in underground construction.

The top down method is used for deep excavation projects where tieback installation is not feasible and soil movements need to be minimized,  metro station construction, tunnel construction, underground construction, etc. 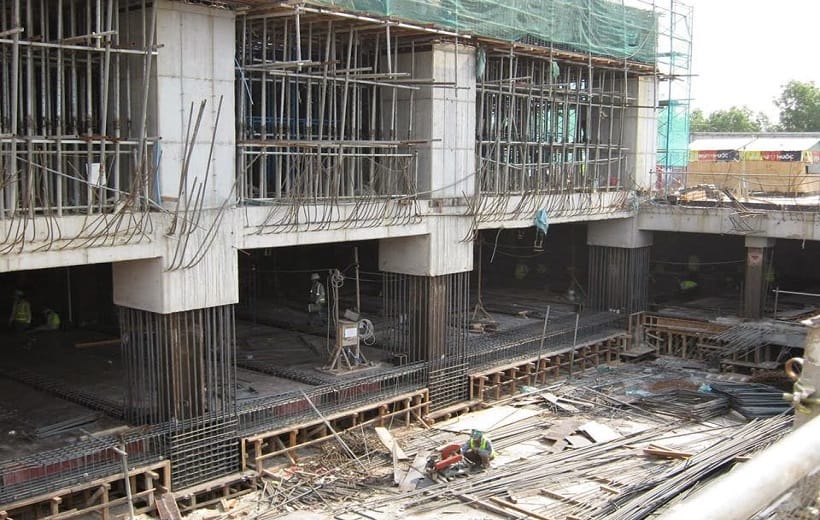 1. Construct the perimeter wall, Construct piles. Place the steel columns or stanchions where the piles are constructed.

2. Cast the floor slab of the first basement level.

3. Proceed to the first stage of excavation.

4. Start construction of the superstructure.

5. Cast the floor slab of the second basement level and proceed to the second stage of excavation.

6. Repeat the same procedure till the desired depth is reached.

8. Keep constructing the superstructure till it gets finished.

Advantages Of Top Down Construction

1. Early restoration of the superstructure is possible even before the completion of the building and the structures above ground can be carried out simultaneously with the structures below ground. This greatly reduces the time for construction.

2. Concrete diaphragm walls are more cost-effective when they can simultaneously function as a groundwater cut-off and temporary soil retention system during the excavation phase of the project and then as permanent underground walls with load-carrying capabilities for the finished structure.

3. Easier and more economical construction of roof since it can be cast on prepared grade rather than using bottom forms.

4. The structural slab act as internal bracing for the support of excavation, thus reducing the number of tiebacks required.

5. The virtually vibration-free operation minimizes the potential for ground movement and its resulting detrimental settlement.

1. Inability to install external waterproofing outside the walls.

2. Potential water leakage at the joints.

3. More complicated connections for the roofs, floor, and base slabs.

4. Access to the excavation is limited and limited space for the construction of the base slab.

Types Of Foundation In Construction

Components Of A Building

4 thoughts on “Top Down Construction – Procedure, Advantages And Disadvantages”